Sheffield Ate Up All the Pies 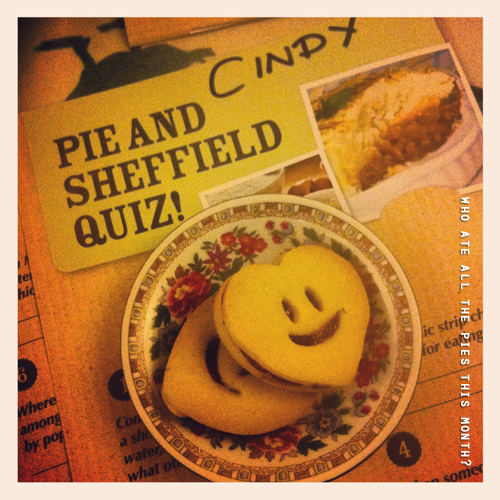 It’s been hearty pies all round at Honey Pie Tearooms this evening in aid of St Luke’s Hospice Sheffield.

Being a big fan of the traditional British pie, it would’ve been against my Sheffield food religion if I didn’t show support for ‘The Great Pie and Peas Up’ campaign with St Luke’s Hospice, a deliciously creative fundraising campaign to raise money for the St Luke’s in-patient unit.

The tasty campaign throughout March encouraged and invited the people of Sheffield to host their own Pie Night, asking their diners for donations. I was invited by Janine Morrall and Shaun (two colourful locals I have met through Pud Inn, who I’m now happy to call friends) to come along and indulge in homemade delights including meat and potato pie with own made mushy peas followed by rhubarb pie and custard. Delicious. We all sat cosily with plate loads of goodness whilst passing around special bottles of Henderson’s bearing the Pies and Peas Up mark – Splashingly good stuff!

Big thanks to our hosts for the evening, Janine and Shaun, Jo Hardiman and everyone at Honey Pie Tearoom for the tasteful tea room surroundings. The delicious evening along with huge generous donations for a Sheffield raffle raised a total of £291.70 for St. Luke’s Hospice.

I’m currently feeling happy to had been amongst the thousands of people who would’ve sat down to have pie and peas this month in aid of St Luke’s. A Life of Pie is certainly good stuff! – Missie Cindz x