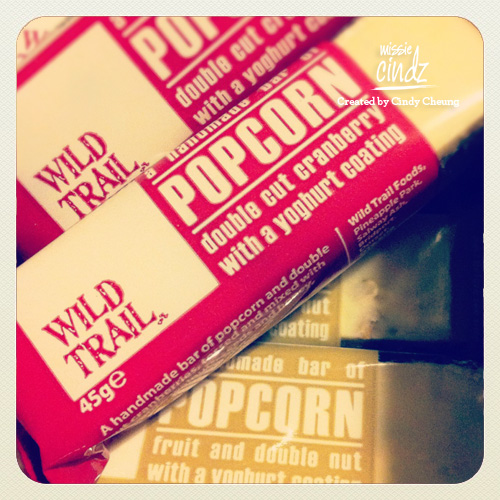 Currently I’m rediscovering popcorn. To be honest, I’m not a massive fan of the popping corn, and the only time I’d ever buy the stuff is perhaps on my way to the cinema (and it’s got to be heavily coated in toffee!!) – the main reason being, I dislike the little shell bits getting stuck in between my teeth, it’s horrible. Some movie theatres (usually smaller independent ones) have decent popcorn, but most don’t – it’s overpriced, hard and really dry!

These day, my friend’s have become a bit of a so-called ‘feeder’ to me. Lauren treated me to a Wild Trail Popcorn bar – I’m told that they’re the world’s first popcorn cereal bar! It’s a small compact bar (45g, rrp £0.99p) packed with popped corn mixed with nuts, fruits, seeds and topped with a yogurt coating. It also says on their tastefully designed packet “A hand made bar of popcorn” – and anything personally hand made sounds nom-ful to me! A couple of days later, Wild Food Trail sent me a few more bars of their other flavours to try – I’ve not seen these available in Sheffield.

There are three flavours available to choose from being:

My favourite flavour’s Cranberry with a Yoghurt Coating. I liked them because they make a good change to the typical cereal bar fayre. Biting into the bar, I wasn’t prepared for the lovely taste it would have, the bars are nice and crunchy. Full of fibre and good nutrients so they’re pretty good if you’re a grazer like me and binge between meals. However, they’re good to start off with but then I found that by the end of the bar it was too much – all those ‘healthy’ nuts and seeds are really filling. That could just be me but apart from that they’re delicious. You can definitely pick out the flavour of the popcorn and dried fruits in the bar and the yoghurt was nice to nibble on too – plus it doesn’t hurt that their packaging is nice! – adopting a nice branding/colour palette with tasteful-looking packaging.

So the next time it’s a movie night, forget the huge bag of ‘overpriced’ popcorn and scoff on some wild bars of corn (or it’s just the thing to keep you going half way through a boring film too! :)