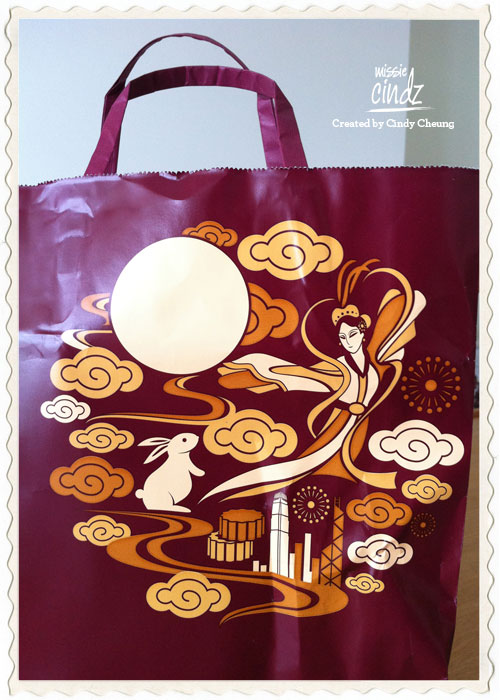 The gift bag that contained my box of Chinese moon cakes 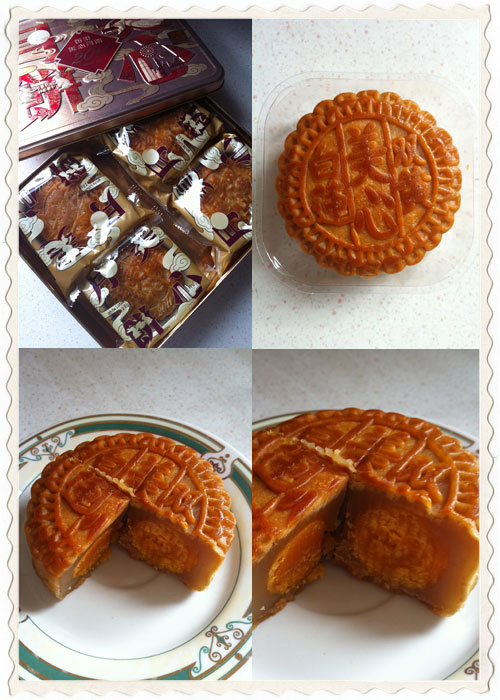 Get that kettle on, I love Chinese moon cakes. If I have a whole one, those frocks definitely won't fit!

This weekend is Mid-autumn Festival (or sometimes called Moon Festival) and is usually celebrated on around the 15th day of the eighth month in the Chinese lunar calendar, which is usually when the moon is at its fullest. Missie Mum says “Mid-autumn festival is one of the most important festivals for the Chinese and dates back more than 3,000 years, to a time when the Chinese believed that the moon was the home of a beautiful goddess called Chang, the Chinese goddess of the moon, who only lives on the moon. Extended families get together and prepare delicious meals such as dumplings and cakes, which represents family unity and this is where the moon cakes comes in making them an essential treat for this festival.”

Every year our family will receive boxes of moon cakes from friends and family members as kind gestures. Most moon cakes consist of a thin, tender skin enveloping a sweet, dense filling, and may contain one or more whole salted egg yolks in its center to symbolise the full moon.

Eat to a size moon!
Typical moon cakes are round or squared, measuring about 10 cm in diameter and 4–5 cm thick. A thick filling (usually) made from lotus seeds paste – what is lotus seeds paste I hear you ask? this is dried lotus seeds which are stewed in water until soft and then mashed into a fine paste. The paste is then watered down and passed through a sieve and into a cheesecloth which helps to squeeze the mixture dry. This produces a fine crumbly paste, which is then mixed with sugar or other sweeteners and often oil to produce a smooth sweet paste…which I find, tastes a bit like fudge.

This filling mixture in typical moon cakes will usually contain yolks from salted duck eggs then surrounded by a relatively thin (2–3 mm) crust. Chinese moon cakes are usually eaten in small wedges accompanied by Chinese tea – I can assure you that a small wedge is more than enough at a time, the lotus filling’s very rich and dense, plus each moon cakes energy content can vary with the filling and size but the average cake carries 800 to 1200 kcal each (YES, really!! mainly from fats and sugar).

The mooncakes I had (as pictured) were filled with lotus seed paste and two salted egg yolks (the more egg yolks a mooncake has generally the more expensive they are too). Many people consider the lotus paste filled cakes to be the original and most luxurious mooncake filling, lotus paste filling is found in all types of mooncakes but due to the expensive price of lotus paste, white kidney bean paste are sometimes used as a filler instead though (I’m a fan of the red bean paste filling type too).

Traditional moon cakes have an imprint on top consisting of the Chinese characters for “longevity” or “harmony” (as pictured), as well as the name of the bakery and the filling inside. Imprints of the moon, the Chang woman on the moon, flowers, vines, or a rabbit (symbol of the moon) may surround the characters for additional decoration. Moon cakes are considered a delicacy and it is a special treat if someone buys you a box of four as production is very labour-intensive. People rarely make them at home now so most prefer to buy them from commercial outlets such as Tai Sun or Wing Yip Oriental Supermarkets, or even from smaller individual bakery shops, such as Cakes R Us on London Road in Sheffield or at high-end Chinese restaurants. The price of mooncakes usually ranges from UK £20 to £35.00 for a box of four – the box I have (pictured above) were £25.00.

Falling for the shiny shiny tins…
Moon cake retailers will compete for buyers’ attention with bright, attractive packaging, (although some would say almost 40 per cent of mooncake box packaging is unnecessary and wasteful). But moon cake producers have resorted to ever-expanding efforts to make their packaging more elaborate as they believe that the more attractive the packages, or by adding “gifts” inside the packages such as bottles of wine or a small golden figure of Buddha. It is a tradition of Chinese people to visit others with presents during festivals and people usually choose those with good-looking packages for the sake of having “face,” no matter the true value of the food itself. You can see how much expense and time has gone into the tins and gift bag design (see pictures above) and I know I shouldn’t but being a Designer, I’m a sucker to all these ‘shiny’ add-ons and fall for them every time! :)

Time to put the kettle on and have another 500 kcal ‘small’ wedge of cake!….Happy Mid-Autumn Festival to my Chinese friends and family.
Cindy/Missie xx