Bring it on – National Chip Week 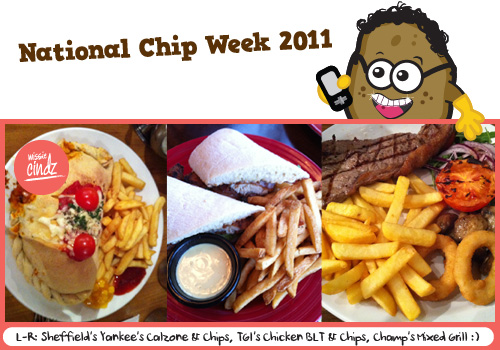 National Chip Week returned for its 20th anniversary yesterday (21st – 27th of February 2011), which organisers hope will raise awareness, consumption and sales of chips and potatoes. Can you blame me for encouraging a bit of gratuitous chip gazing? (see above, hahhaha :)

Why not give yam chips or sweet potato chips a try too? They make a good change from potato chips ! Sweet potato chips, salty chips, curry and chips, cheesy chips!!!! mmmmm – Let’s all raid our local Chippy and celebrate the humble Mr Potato! Will you be having any chips this week? http://bit.ly/hhSf0m or any there any Sheffield Foodies doing Chippy Specials!? Let me know.

Tweet me a piccie of your plate of chips – I’m always up for a gawp of people’s foody snaps :)

INTERESTING FACTS ABOUT POTATOES
• One out of every four British potatoes are made into chips, amounting to around 1.5m tonnes every year
• It would take an area the size of 56,000 Wembley Stadium football pitches to grow all the potatoes needed for the chips consumed in the UK every year