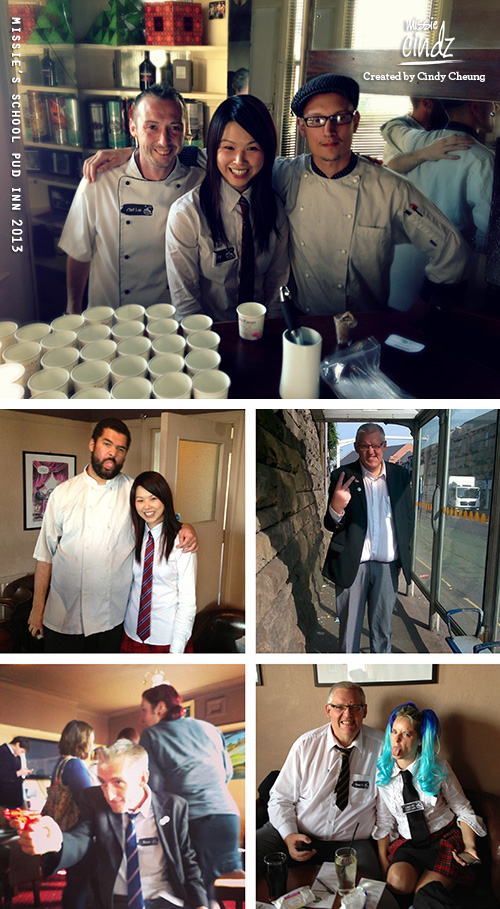 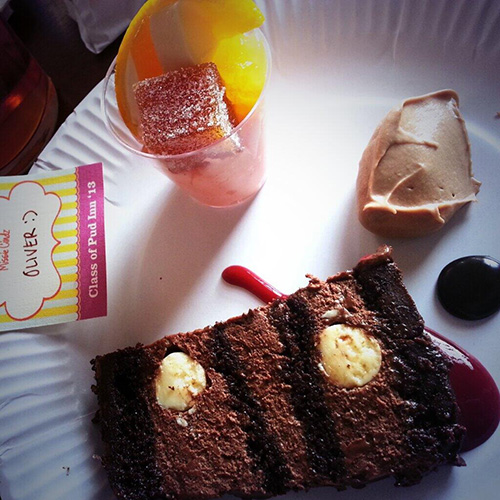 Last weekend’s Missie’s Pud Inn saw us all going back to school at The Rutland Arms for a lesson about five puddings & connecting with our community! Our Guest Chefs and makers shared with us their (sweet) old fashioned British school dinner food at its best. We also had lots of mischievous school boys and girls – who all contributed to the fun & charm of School Pud Inn.

What’s for pudding at Missie Cindz School of Pud Inn?
In every event, I like to add touches of Missie-ness, including a ‘Score and Comments’ sheet to get diners talking and interacting with their desserts, a Pud Inn Back to School quiz/worksheet so everyone can work in their table teams to win foodie prizes, and then, if five courses wasn’t enough pudding, I also involved a ‘Tuck Shop Treats Table’ – where diners could voluntarily bring in some of their own favourite homemade (or shop bought) food treats with a School theme for everyone to try. There was a plethora of treats that clearly showed diners showed enthusiasm for kid-approved sweet treats (pictures below). If the afternoon’s array of treats didn’t take everyone back to childhood then I don’t know what would.

Let’s take a step into class…. No running in the corridors was allowed! 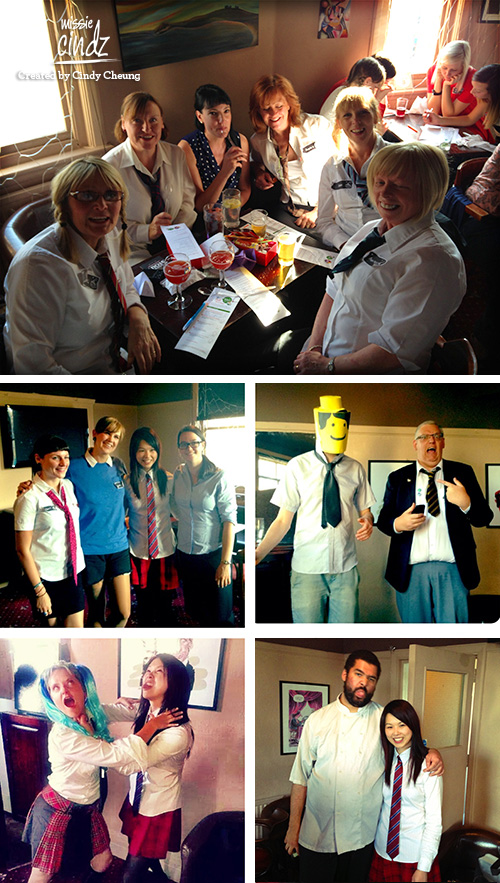 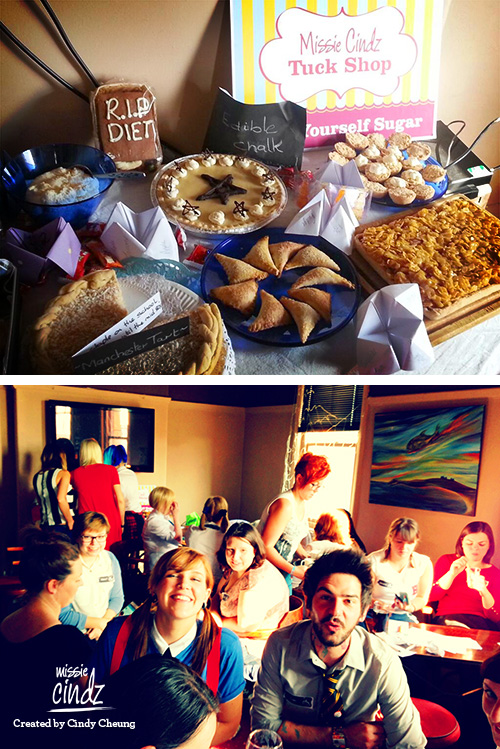 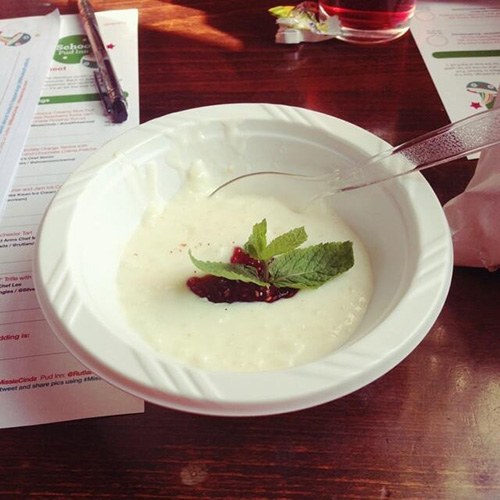 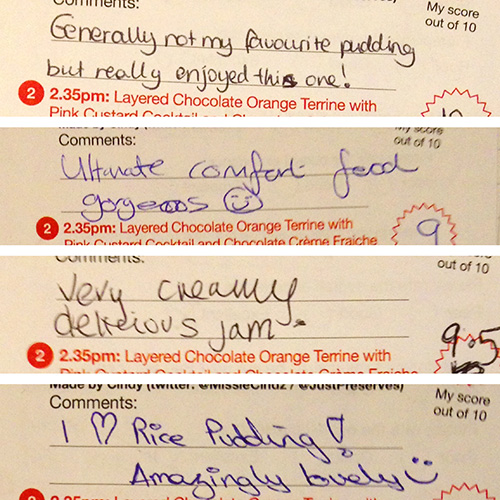 Course One: Missie-licious Creamy Rice Pudding served with Just Preserves Extra Raspberry Jam made by Missie Cindz – As a kid (and grown up), I love rice pudding with a dollop of good fruit jam, probably because they were the nicest things at my school – the stuff’s economical, comforting and so delicious!

I wanted to revisit this favourite dish of mine and created a more sophisticated adult version but essentially the same old rice pudding I know and love for diners to try. Just Preserves Extra Raspberry Jam are one of my favourite local Sheffield jam makers, their Extra Raspberry Jam complemented my rice pud perfectly. I guess I’ve grown up a little too, but I did still lick the spoon from the (big) saucepan! :) You can find Just Preserves supplying local shops, cafés, delicatessens and farm shops across Sheffield – including Urban Pantry, Snap Deli, and Our Cow Molly Farm shop. 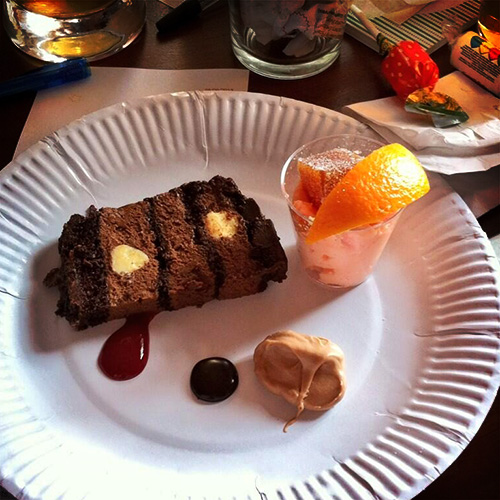 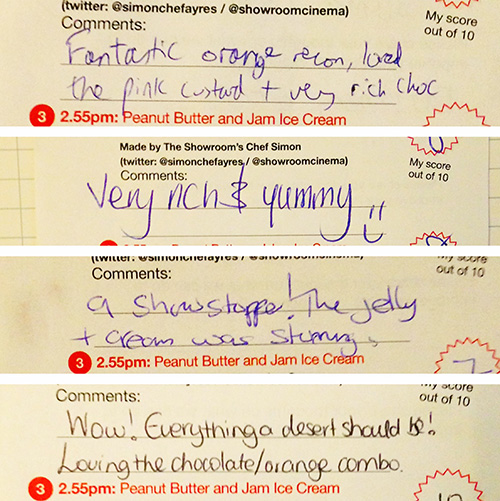 Course Two: Layered Chocolate Terrine with Pink Custard Cocktail and Chocolate Creme Fraiche made by The Showroom’s Chef Simon Ayres (twitter: @simonchefayres). This was an indulgent  trio of milk, dark and white chocolate combined in a delectable mousse-like dessert. Simon’s luxurious course had all the elements one would wish for in a school dinner (party) dessert. It looked super, and students were in awwwwe with all of Simon’s pudding elements and amazing flavours. Small slices of the dessert were advisable as it was incredibly rich. Thanks Simon, we’re definitely having you back for school dinners again! :) 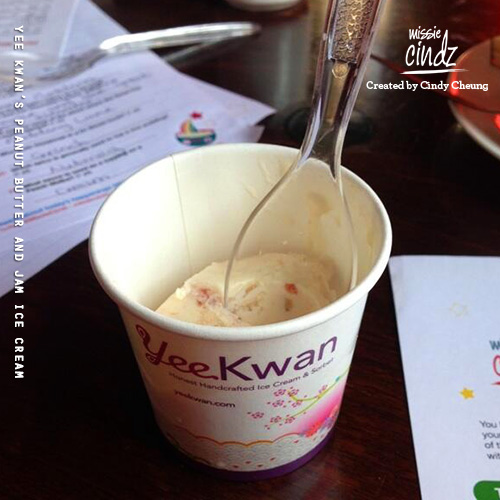 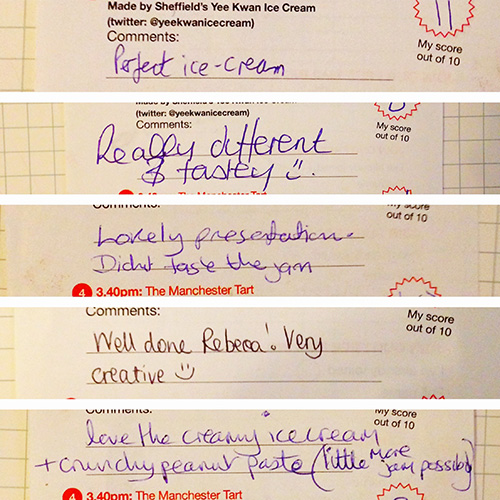 Course Three: Peanut Butter and Ice Cream made by Yee Kwan Ice Cream (twitter: @yeekwanicecream). This was the winning flavour of our Back To School Pud Inn ice flavour competition. Flavour suggestion from Rebecca Helen: “PB & J ice cream. Perfect school sandwich. Peanut butter ice cream with strawberry swirls and chunky nuts and strawberry bits!” – and Yee did a great job in representing the quintessential childhood favourite – a sandwich loved by all. In appearance, Yee Kwan’s exclusive Peanut Butter Jam flavour for Pud Inn was a creamy, white colour tinged with the swirls of light brown peanut butter and red rasp/strawberry. The ice cream carried the heavy scent of peanuts, but any presence of the fruit jam remained undetectable to the nose (perhaps more jam?). Yee’s peanut butter ice cream was certainly equally addictive as peanut butter itself and let’s hope she puts it on as a permanent flavour to her ice cream menu. Thank you Yee! 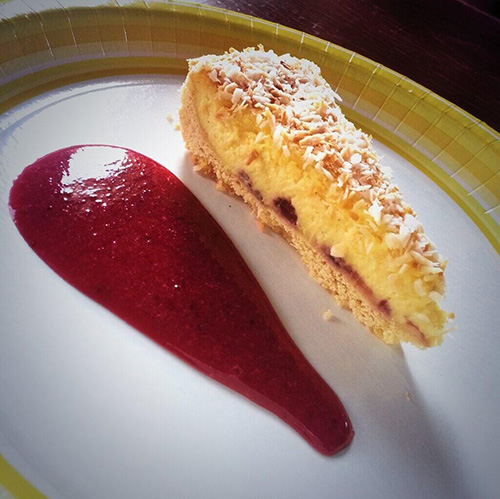 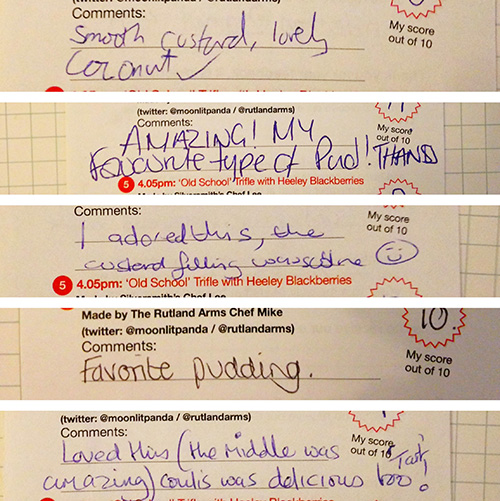 Course Four: The Manchester Tart made by the Rutland Arms Chef Mike (twitter: @MoonlitPanda) – Coming up with a pudding Chef Mike’s thoughts turned back to his school days and the British classic, the Manchester Tart. He tells me, the tart made regular appearances on his weekly school dinner menu and it was something a bit traditional to share. Mike’s tart was also a hit with diners, who said that the pastry and custard filling was really good. 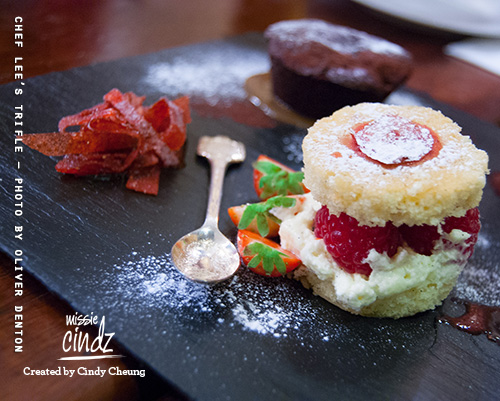 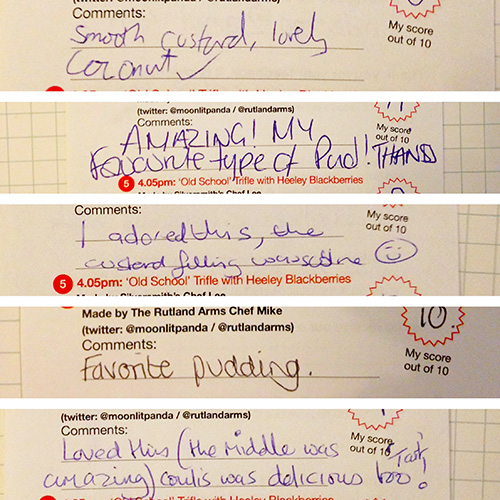 Course Five: Old School Deconstructed Trifle served with Heeley Raspberries made by Silversmith’s Chef Lee Simon Mangles (twitter: @LeeSimonMangles / @Silversmiths) – Lee tells me, as usual he wanted to make something a little different in the way of presentation for us, by using an old idea/dessert and updating it. He decided to make trifle, as a kid it was something his mum was able to make. The only real difficulty was making sure the custard was set properly inside the jelly, other than that he tells me it was plain sailing. Lee also mentioned that he always tries to make a dessert for Pud Inn that is in keeping with Silversmith’s ethos of using local produce and is current/next on the restaurant’s menu. Thanks Lee – it’s always fantastic having your desserts on our menu, always full of creativity and excitment! :)

The Best Class Ever – IDST
A personal big thank you to all our pudding makers for the afternoon’s courses – plus, not forgetting the Rutland Arms for being the ideal place to have Pud Inn. Everyone made a contribution to Pud Inn in their own time for the love of a good pudding and to bring the Sheffield community together.

So who was voted diner’s ‘favourite’ pudding I hear you ask? (drum rolls please…..) – Pudding no.4 made by the Rutland Arms Chef Mike. Mike’s simple Manchester Tarts won diners votes as their fave school pudding. Everyone captured the fun and meaning of Pud Inn, thank you for sharing so many delicious photos of our event. Well done to Andrew and Sarah who were voted as best dressed school boy and girl and won complimentary meal & drink at the Rutland Arms. 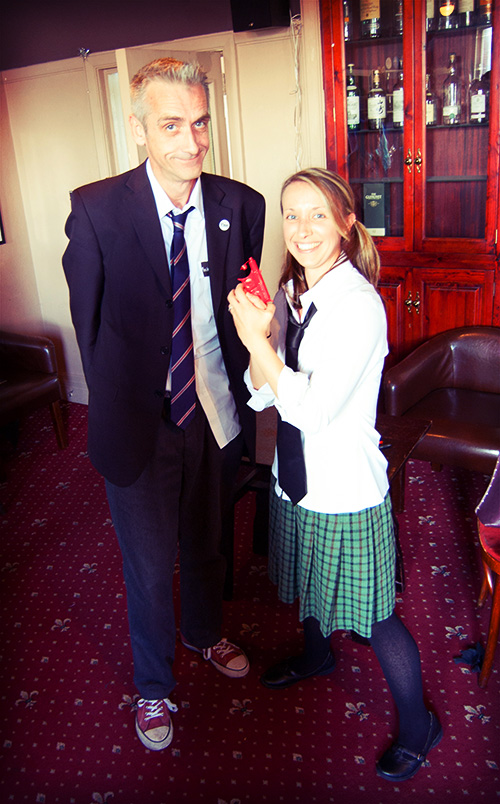 Andrew and Sarah, Our BEST DRESSED school boy and girl :)

Keep in Touch
Please join my mailing list to be kept up to date with all of my latest discoveries, events and products. Or alternatively for those that don’t know, you can also follow my smaller perky type updates and happenings on twitter, and facebook for more lengthy and visual happenings.

Many thanks to Chef Simon, Lisa and Lucy, Chef Mike, Hannah and Chef Lee for your help in dishing out the courses – you were all fantastic! 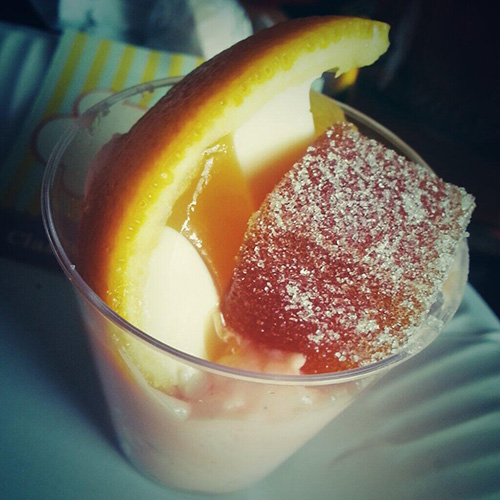 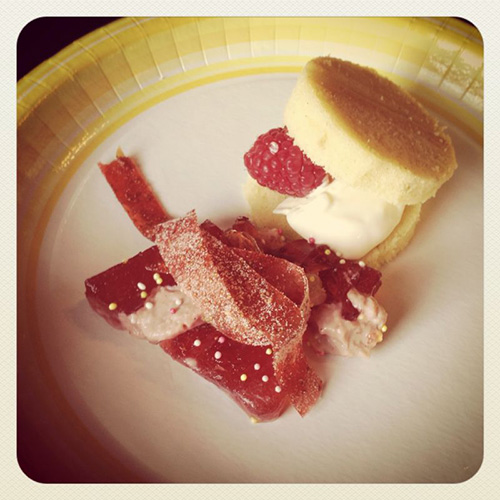 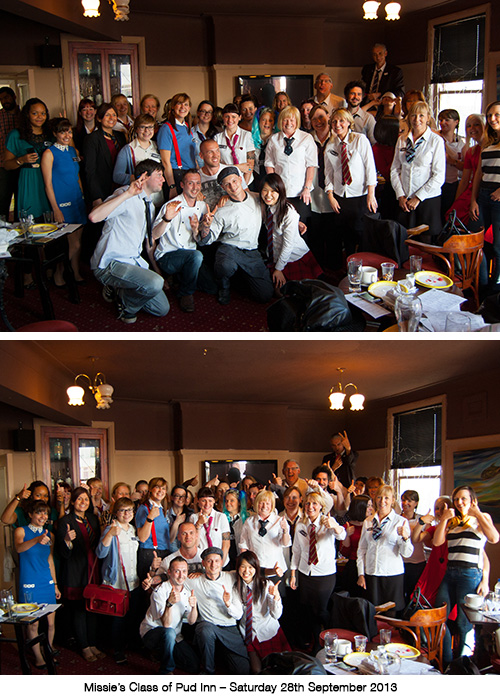 The best: Missie's Pud Inn is top of the class!

{All photos courtesy of diners – Oliver Denton, Emma Fisher, Clare Farmer, Keri Rowsell, Emma Maillard, Harriet Godfrey and Eloise Charity. There are more photographs from the event on my facebook page here} – See you all at Christmas for the next Pud Inn fest! – Missie Cindz x