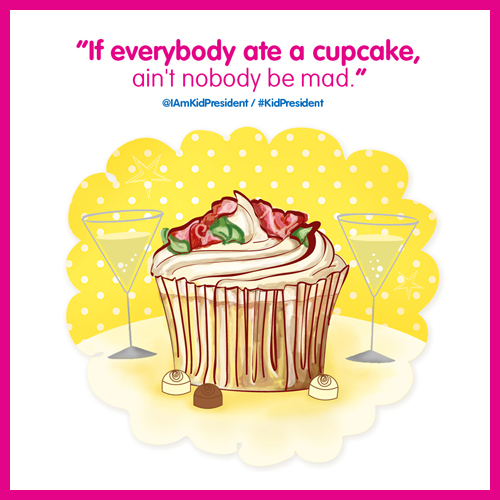 If everybody ate cupcakes, ain't nobody be mad – Kid President

“If everybody ate a cupcake, ain’t nobody be mad” – us grown ups can learn a lot from kids! Especially, this one called #kidpresident. By far, he’s the coolest kid on the internet.

A Pep Talk from Kid President to YOU…this must be the most awesome video ever: We All Need Pep Talk… – thanks Liam Swift for sharing it with me on twitter.

There’s also this video that’s bound to make you smile too… “If everybody ate cupcakes, ain’t nobody be mad” – Kid president is a wise one. If you like this post, share it with family & friends and make sure their ‘good’ tooth’s been pulled!

I must get that @IAmKidPresident to Missie’s Pud Inn Club one day – an awesome serving of goodness! – Missie Cindz :)