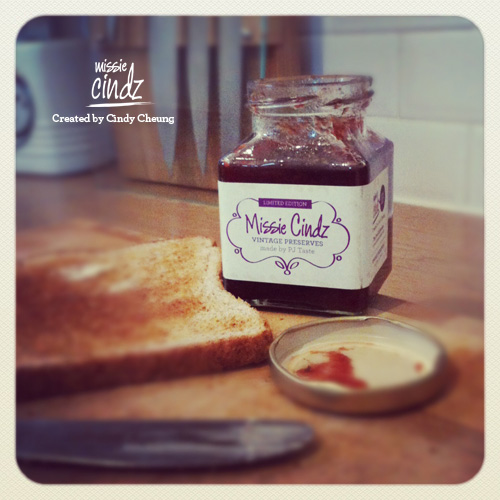 Farmhouse Breakfast Week begins on 23rd January and I would have to say one of my very simple breakfast ‘favourites’ is extra thick toasted granary bread with my Missie Cindz plum jam and peanut butter. Nothing can beat home made jam, especially at breakfast.

With a chance of winning a jar of the sweet stuff, pop over to my Missie Cindz Facebook page, find the photo as seen above and TAG YOURSELF OR SHARE the jammy photo with your friends. Go on, spread a little Missie-ness on your morning toast…it’s CinDilicious!

Closing Date: Sunday 22nd January 2011.
Winners will be picked at random.
Winner will be notified on Facebook and via email on Monday 23rd Jan. Posted first class for jam spreading the next day. Good luck everyone!

When is Farmhouse Breakfast Week?
Farmhouse Breakfast Week takes places between Sunday 22nd – Saturday 28th January 2012. The campaign is now in its 13th year so is well established and there’s many ways people can get involved in promoting such a nomful campaign and if food is your business, it’s a great opportunity to promote your breakfast offering, perhaps by running a competition, highlighting local suppliers or holding tasting sessions. There’s plenty of ideas and suggestions on the Shake Up Your Wake Up website. Now who said jam and toast was boring!?

Missie Asks: What’s your most favourite classic jam or chutney on toast? and if you’ve made jam, what fruit do you like to use for it?

{Photo by Tobey Dodwell at We Are Fine}