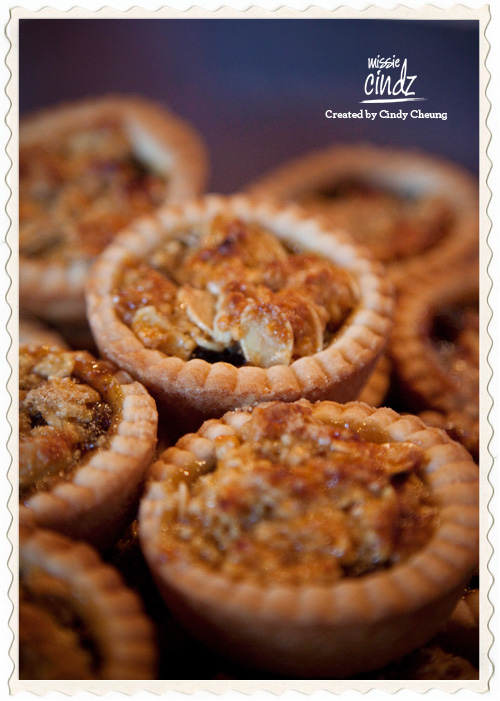 I love a good mince pie – those small, tender tarts that somehow manages to hold the very essence of Christmas in its short crust pastry shell; the flavours, fruitiness, scents and spices, the luxury and richness of it all. It’s strange because when I was a kid, I used to hate the stuff, the taste of the brandy put me off and I remember, I used to eat the crust but left out the rich mincemeat! (how taste buds change…)

But now, with its buttery pastry and filling of rich fruits, sugar, candied citrus peels and alcohol – making them the essence of Christmas in a mouthful, scoffing these really makes my tummy smile. Last week I had a mince pies which had a pastry so fragile that it collapsed in the palm of my hand, with mince stuffing that wasn’t overpowering that made me feel boozy and the pastry lid, instead of a hard pastry shell, was a buttery almond frangipane-type topping making them so much better. I adore mince pies, I’ve never attempted to make my own (yet!) and will do very soon after tasting the frangipane mince pies made by my design colleague, Lauren Jones. I simply fell in love with the flavour combinations and the almondy frangipane mix makes a perfect topping for a mince pie. Simply a great idea, where mince pies just got better!

Do you make the perfect Christmas mince pies?
A few weeks ago I asked you all to share with me your top tips for the perfect mince pies (maybe you’ve got a special ingredient for the pastry?) let me know them all in the comments box below, afterall, this is a post for the Ultimate Festive Mince Pie! :)

Thank you to those who replied and commented – I really enjoyed reading your tips, keep these coming: