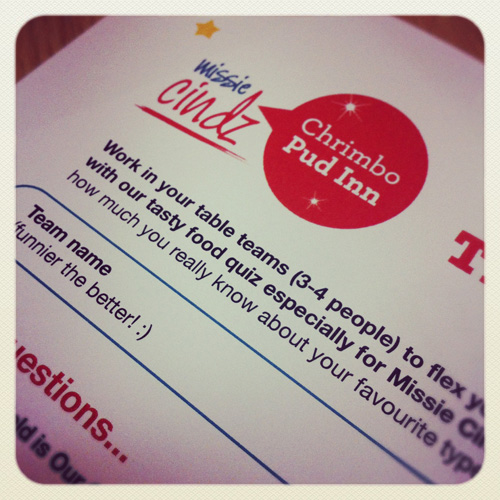 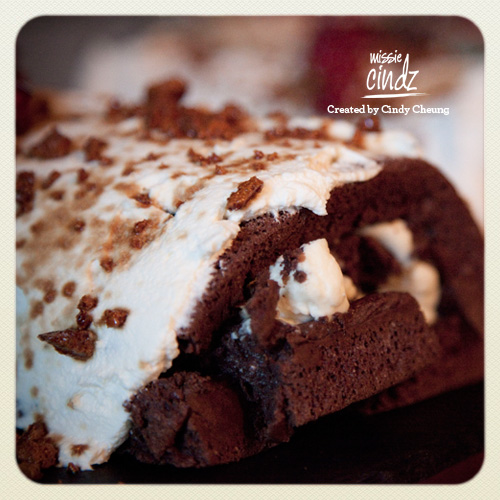 25 pudding enthusiasts joined me for desserts last Saturday at my favourite Pud Inn – the Rutland Arms. After the first successful pudding event back in September, Pud Inn no.2 turned out just as sweet and exciting too! There were many puddings attached to the fast-coming Christmas season and everyone had their favourites. At Pud Inn, I tried to provide a wide variety of popular treats, some desserts you may recognise and have tried, others not. A big thank you to our five star pudding makers for last Saturday’s treats, which featured Sheffield’s Victoria Made Cakes, Yee Kwan Ice Cream, Chef Mike of the Rutland Arms, my Aunty Tracey’s amazing masterpiece in the form of a Chinese Christmas sponge cake and Ryan Swift and Lauren Swain’s joint effort in making delicious homemade ‘pimped up’ mince pies.

Missie’s (Cindy’s) Pud Inn event are pudding gatherings I curate that serves up a five-course pudding set menu with a different theme for each event, this one being ‘Christmas’. I liked the idea of a pudding gathering because they’re socially fun, a great way to meet new people over mouthfuls of sweet goodness, plus finding foodies to participate in making us something lush to eat was like a dream! :)

It was great to see new faces too – we had a bunch of guys from The Real Ale Society, a mother and daughter and even people who weren’t from the Sheffield area, all helped to show how my pud events were slowly diversifying to a much wider range of people. With the added dosage of Missie-ness by the use ‘Score and Comments’ sheets (as pictured) to get people talking and interacting with our five puds (by the way, this wasn’t a competition and no-one was upset with any of the comments :) along with a pudding quiz I designed, with questions involving Sheffield’s food producers and general food knowledge questions – these all helped to contribute to a more playful, fun and ‘charming’ touch to our second pudding event.

The afternoon started at 3.00pm where I greeted our pudding attendees – I did try my best to go round and greet you all :) People bought drinks at the bar and made themselves comfy at the table. When the ‘quick’ full history and hellos of the club were explained. The serious business began, five traditional puddings were dished up…starting off with Chef Mike’s boozy chocolate brandy roulades (yes, roulades, generous chef Mike made a total of FOUR cakes to make sure that there would be enough to go round!), served tastefully on black slates. This pudding was unashamedly decadent – a light chocolate sponge and filled with whipped cream and Brandy that oozed out at the ends – I actually I liked it this way, it made the roulade look a lot more decadent and that can never be a bad thing, surely? Two words, ‘deliciously gorgeous’, beautifully presented too – I loved the bunches of cranberries on top of each roulade – 10/10 for presentation Mike! Nestled inside were very deep and luscious flavours. I’ve never tried my hand at roulade but after seeing Mike’s attempt, I would love to one-day. 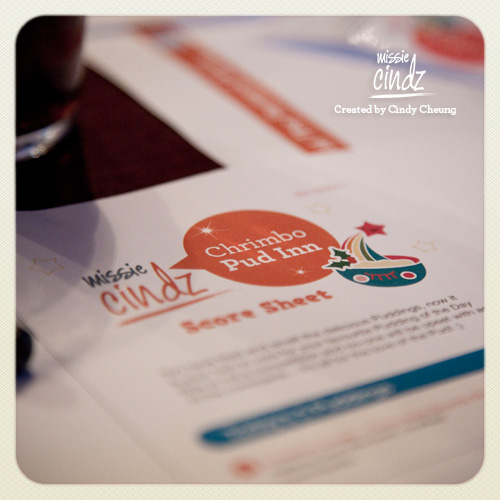 Comments for Mike’s pudding from the attendees’ score sheets included: 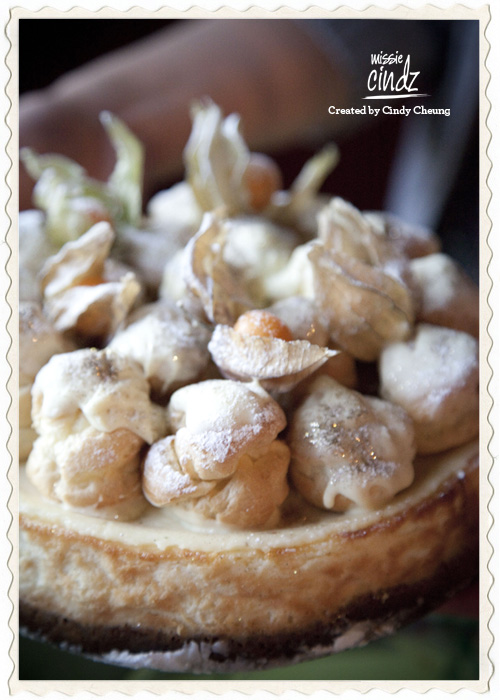 Next up was Pudding number 2: a baked vanilla cheese cake with chantilly filled white chocolate profiteroles made by Victoria Made Cakes. With a showstopping pudding like this you’d surely impress your guests – this pud looked far too good to cut up and eat – definitely one beautiful cheesecake, just look at the glittery bits on the profiteroles too. The biscuit base was rich and thick, really buttery and the edges golden brown – I had three teaspoons of the stuff and felt the sugar sweats coming on! – this was a very rich pudding and I wouldn’t be able to eat more than half a slice in one sitting, the chunky pieces of white chocolate found in the profiteroles were nice surprise touches. Pud attendee’s waistline would suffer if we made a habit of scoffing Victoria’s treats but, oh well, it is Christmas afterall! (I will treat myself to this again). Thanks Victoria for the amazing cheesecake. 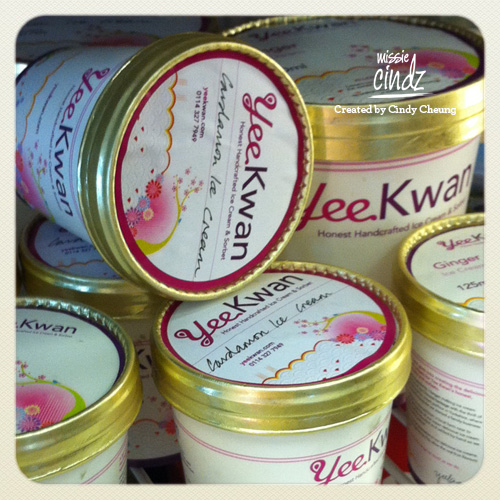 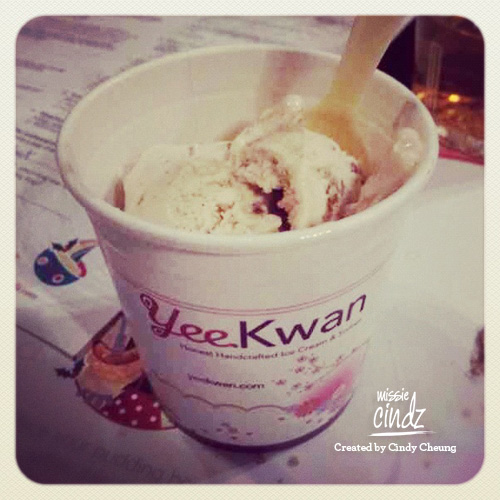 Pudding 3 came in the form of Yee Kwan’s Christmas Pudding flavoured ice cream – a limited edition flavour made especially for the festive season. Each attendee received 2 nomful scoops (we had people coming up for seconds too!). There’s a good reason why Yee’s stuff has won two major food awards including Deliciously Yorkshire Gold for her black sesame ice cream flavour, with her iced treats also found in Harvey Nichol’s food dept, a huge number of local restaurants, delis, farm shops, and many more shops throughout Sheffield – everyone’s going to be looking forward to a Christmas of delicious ice cream!

I’ve met Yee a few times now and she always demonstrates huge scoops of passion for producing her top quality ice creams – which inspires me with Missie Cindz! You can check out more about Yee Kwan’s delicious ice creams and the amazing range of flavours available, on her website at: www.yeekwan.com 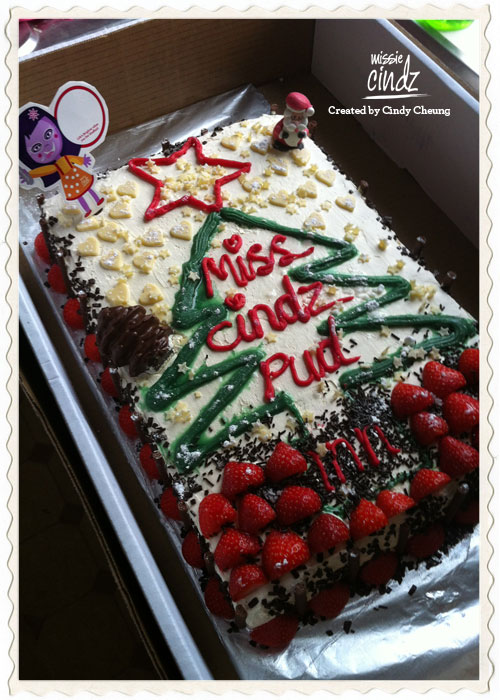 Next up, pudding 4 was homemade by my Aunty Tracey, a Chinese sponge cake, the stuff you’d typically find in Chinese bakeries – and this masterpiece was huge!! (just look at the pic’ above). The cute portion size nicely sliced up with help from Chef Mike made the pud look too cute to eat plus, I did think by now, attendees would appreciate the small portion size. Different from your typical sponge cake, chinese style sponge is very light, mildly sweet and fluffy, they’re cakes accented with fresh fruit (such as peaches, kiwi, melon, mango and strawberries) and whipped cream frosting. I wanted to involve something different for people to try and because this sponge cake is really light, airy and tender.Most people would get their first taste of this style of sponge cake as a swiss roll type cake, very frequently sold in almost every asian supermarket, where a thin layer of sponge cake is rolled with a thin layer of whipped cream. Try it the next time you’re out shopping and you’ll see what I’m talking about. It’s very light and not cloyingly sweet at all.

By now, I was looking at guests and thinking whether any of them needed our ‘pudding’ doctor or whether anyone looked as if they were suffering from sugar sweats!? But nah, everyone was still ready for more!…finally but not least, love them or loathe them Christmas wouldn’t be the same without them, pimped up mince pies served with Rodda’s clotted cream made by Ryan Swift and Lauren Swain (I was gutted Ryan and Lauren couldn’t join us for Pud Inn but I hope they’ll be free to join at our next one?). It certainly looked like our attendees enjoyed their pies though – beautifully presented too, and how were they pimped up I hear you ask? – with sprinkles of toasted almonds, nuts, a grate of orange zest and a touch of mixed spice – these pies were pimped all the way! (just look at them below). Everyone had a pie each served with a dollop of clotted cream and a generous glass of mulled wine (thank you Rutland Arms for the wine). 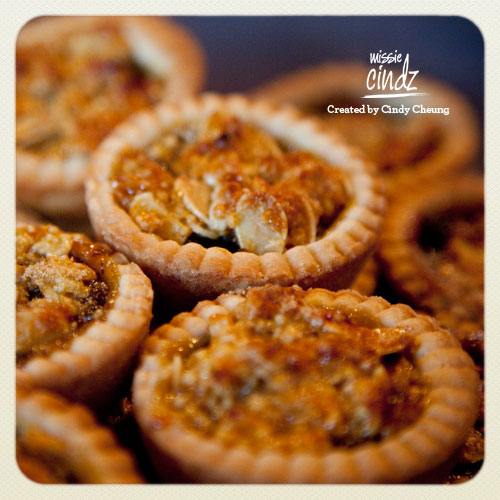 Comments from attendees for our ‘pimped up’ mince pies included:

For me, Christmas, along with its food, is the most fabulous time of the year – family, friends, a little bit of excess, or a lot – I love it – love it all! A massive thank you to everyone who joined us for Puds, and to the Rutland Arms for being a great venue for the Missie Cindz Pud Inn gatherings (great team work! :). Everyone’s tweets and photos on the day were awesome! I’m still smiling from reading the hashtag: #missiespudinn.

I will be sharing more puddin-licious photos for you to gawp at on my Facebook page: Missie Cindz Food Adventures – give me a like and finally, I would love to hear your comments and feedback on Missie’s Pud Inn – please let me know how you think I could improve the event? what aspects of the event did you enjoy the most? what puddings would you like to see on the menu at the next Pud Inn? – all comments can be posted below in the comments box or, if preferred, emailed to: puddingclub@missiecindz.com.

Christmas is all about having fun – letting your hair down and having a bloody good feast – we certainly did both last weekend! If you’d like to sign up to the Missie Cindz mailing list, just drop me an email and you’ll be added to the database. I’m really looking forward to meeting you all again and hopefully those people who couldn’t make it to Pud Inn will be available to our next one?