The other day New Yorker Missie Meng He (@menghe), another food enthusiast and blogger like myself, who I often reckon would easily fit as my sister in food gorging if she was here in sunny Sheffield, asked if I’d tried baked Brie in puff pastry? At first the thought disgusted me (how stodgy and dense would this be!?) after all I’m not a huge cheese fan you see – I like the stuff on pizza and the occasional sprinkle on pasta but baked brie as a meal on it’s own? No thanks. But then I thought, I shouldn’t knock it until I’ve tried it!

AND WOW!! Brie’s become my new best friend (yes, those frocks are going to feel snug again this winter!).

Next week, a very limited edition of  Missie Cindz Vintage Preserves (co-produced with PJ Taste) go on sale in their shop on Monday 3rd October and leading up to their release I will be providing a range of delicious recipe suggestions you could accompany our Sheffield Preserves with. Feel free to download my food recipes and print them off to try and make/bake at home (don’t forget to Twitpic me a photo of your treats with my jams too. I love a good food gawp! :)

Today I’m going to start off with the recipe for:

Baked Brie with Missie Cindz Plum Jam
Try wrapping Brie in pastry and bake until it has thoroughly melted inside – these make a quick and tasty starter. In this recipe the brie is wrapped with Missie Cindz plum jam and flaked almonds, surrounded with pastry and drizzled with sweet Sheffield Honey. 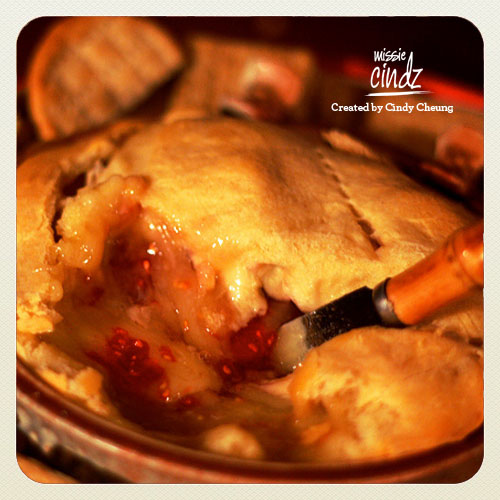 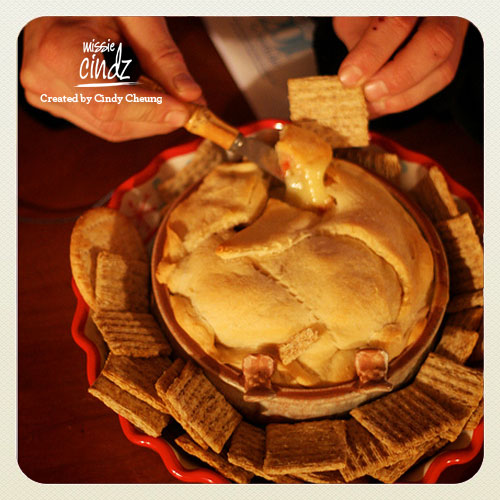 Time
Can be prepared in 20 minutes or less. It’s so easy and tastes divine! (just make sure you’re not dieting!).
Ingredients
1/2 (500g) packet puff pastry (the ready to roll stuff is fine or you can make your own from fresh)
1 (200g) round or wedge of Brie cheese (do not remove rind)
Missie Cindz Sheffield Plum Jam
2 tablespoons flaked almonds
1 tbsp Sheffield Honey

1. Preheat oven to 180 C / Gas mark 4. Lightly grease a 23cm (9 in) pie dish.
2. Slice the wheel of Brie in half, horizontally, so that the halves are two, flatter wheels of Brie. Lay the puff pastry in the pie dish.
3.  Place half of the Brie (rind-side down) onto the pastry and spread Missie Cindz Sheffield Plum jam on the Brie.
4.  Sprinkle almonds evenly over the top. Place the other half of the Brie (rind-side up) over the jam and almonds. Bundle the pastry around the Brie.
5.  Drizzle Sheffield Honey and place a handful of brown sugar on top.
6.  Bake for 15-20 minutes, pastry should be golden brown. Let cool for 10 minutes before serving.
7.  Serve with crackers and apple slices. Delicious! { see photos above. Photos from Meng He Flickr } – thank you! }

TIP: For a non-sweet brie recipe: spread sun-dried tomatoes on the brie instead of the jam, wrap this in the pastry dough and bake. Enjoy! 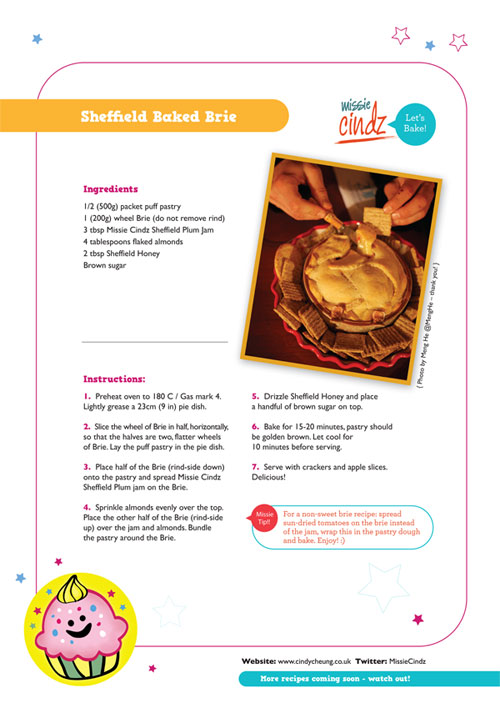 For a printable PDF of this recipe, click here: Sheffield Baked Brie Recipe

Meng’s food photography leaves me feeling inspired… and hungry! There are even more appetising pics (and food ramblings ) on her blog.