Sheffield is one sweet City

I’d wanted to do a Puds Club for a long time, but like always, it was all about the right time and planning. I knew the Rutland Arms would be the perfect place for my Clubs – instead of the usual venues, such as a hotel, someone’s house or Cafe, I thought, how quirky would it be to support my local independent pub with Puds and Cider on the menu? …this was going to be the new Fish & Chips.

Many of you will know how I’m always enthusiastic about food, especially food that is made and sourced in Sheffield and whenever possible I will try to highlight our City’s food gems. So using Puddings, I wanted to involve public engagement by getting people to talk about their ‘Favourite Puddings’ to me – by tweeting the question “what’s your most favourite Pudding?”. This set the ball rolling in getting my followers to talk about all things sweet with me. It was lovely. You can see from one of my previous food posts, people’s comments: Take Me to the Pudding Club

For those who aren’t too sure what Missie’s (Cindy’s) Pudding Clubs are. MC Pudding Club serves up a five-course pudding set menu, with a different theme for each event. Our first theme were ‘favourites’. Clubs are seasonal events I curate to bring back the wholesome ‘Pudding/dessert’ – I liked the idea of a Pudding Club because it’s socially fun, you can chat to people over mouthfuls of sweet goodness and I love all things sweetly made in Sheffield anyway, so curating this event was like a dream! :) 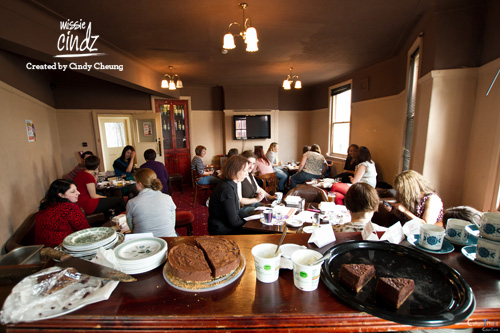 Missie Cindz Pudding Club at The Rutlands. Thanks Callum T Photography for the photo. 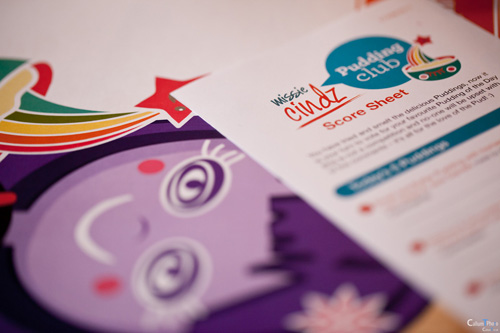 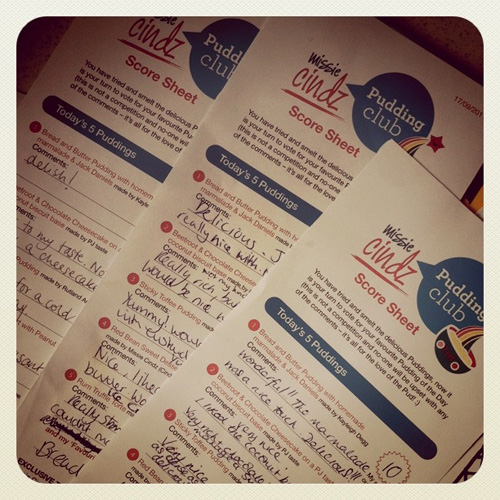 I wonder who was yesterday's most favourite pudding of the day?...you'll have to read on.

I added my own dosage of Missie-ness to the Pudding Club by the use ‘Score and Comments’ sheets (see photo above) to get people talking and interacting with the five Puds they were eating (this wasn’t a competition and no-one was upset with any of the comments) and the use of place mats for people to doodle and illustrate their favourite Puddings helped to contribute a more playful, fun and ‘charming’ quality to our first Puds event. Each Missie’s Pudding Club event also showcases at least one Pudding that is deliciously made by a Sheffield food-related business or artisan baker. Yesterday’s first Pudding Club featured PJ taste, Cat Lane Bakery scones (generously served with my new line of plum preserves) and the Rutland Arms Chef Ricko, plus two delicious Puds made by Pudding Loving attendees, Kayleigh Degg (@kayjoyd) and Annie Parmee :) A big thank you to our star guest Pudding makers for yesterday’s treats. 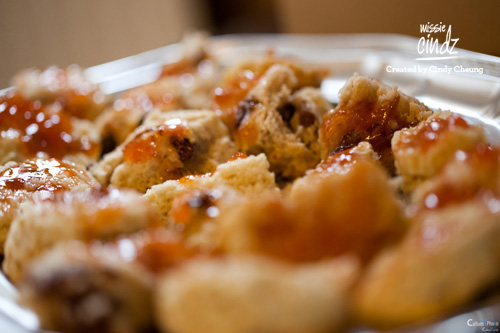 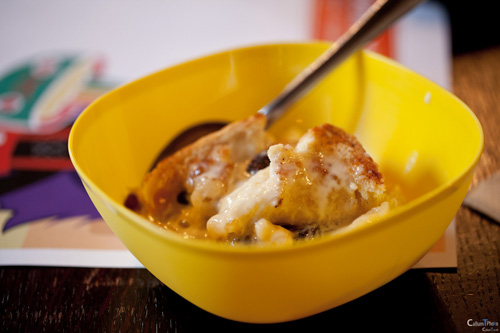 Kayleigh's bread and butter pudding with homemade marmalade and JD. So yum and nom! HUGE portions.

The afternoon started at 4.00pm where I personally greeted all 20 Pudding attendees (I did try my best to go round and greet you all :). People bought drinks at the bar and made themselves comfy at the table. When the ‘quick’ full history and hellos of the club were explained. The serious business began, five traditional, Sheffield-made puddings, starting off with Kayleigh Degg’s Bread and Butter Pudding with homemade marmalade and Jack Daniels served with Rutland homemade custard (thank you Chef Ricko for the VIP custard!). Oh my Cinders. This pudding was deliciously gorgeous and what a huge portion size. The marmalade was such a nice touch, the orange peel was rich and tangy (just how I liked it) – the Rutland Custard helped to keep the pudding moist. Delicious. 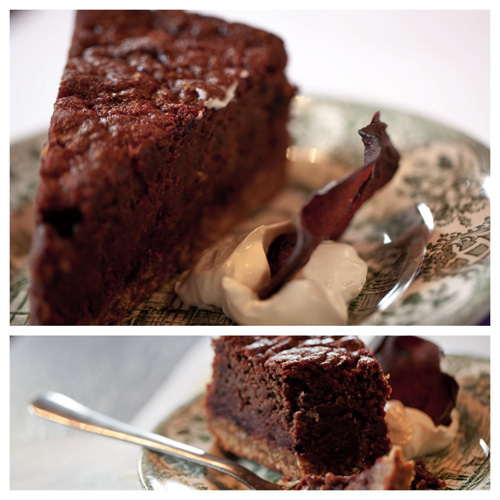 Next up was Pudding 2: Sheffield Beetroot and Chocolate Cake on a Coconut, Ginger and Lemon Grass Base made by PJ taste served with creme fraiche. Like always, PJ taste’s desserts are always beautifully presented. This pudding didn’t taste like the usually cheesecake you’d eat, more like a cake, but that’s what I love about PJ taste’s food, they always aim to surprise us! (and I love to be surprised). I don’t think there was any cream cheese in the filling, was there PJ taste? (it definitely tasted very healthy too – even with chocolate) and the added beetroot helped to give the cake filling moisture, full of flavour and a beautiful colour too – a really nice combo which worked well. I’m not sure if other pudding attendees would agree, but I didn’t find the cake too overly rich – on looking at the cake, you’d think it would be loaded with chocolate and immensely dense but it wasn’t. The coconut base was especially yum! HUGE portion size so those takeaway boxes PJ Taste provided us were exceptionally handy too – we don’t like to see good Sheffield Food going to waste, so the leftovers went to good homes :) I wonder if this cheesecake will be making an appearance on the PJ taste menu board? I hope so.

Some of the comments from attendees included “Tasty! – good textures with a nice blend of flavours flavours” and “Really unusual but in a nice way! Loved the coconut biscuit base”. 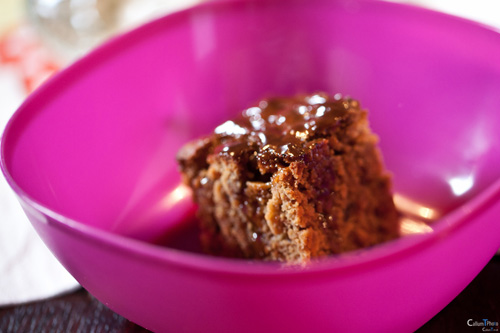 Pudding 3 was sticky toffee pudding made by The Rutland’s Chef Ricko. The cute portion size drizzled in sticky toffee sauce made the pud look too cute to eat. I enjoyed this pudding because it wasn’t too heavy as I thought it would be, the crunchy crust was lovely, looking at some of the attendees comments from the Score sheets, a lot have said this pudding would go really well with ice cream. The hint of ginger was a nice touch too. Someone commented “A perfect winter warmer!” and “very tasty, not too sickly – put it on the menu!!” <<<—- hint hint Rutland. 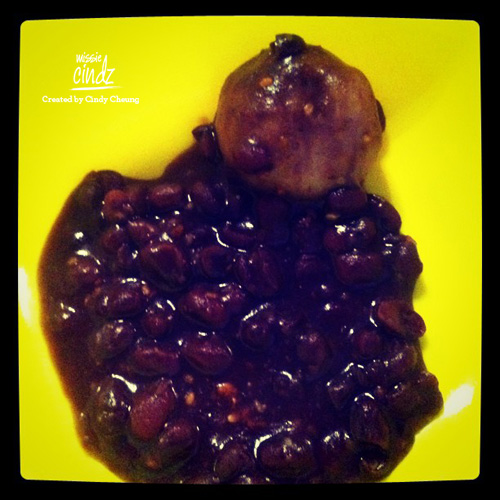 Pudding 4: red bean sweet dessert with peanut mochi. Thanks Timmy for the photo :)

By now, I was looking at guests and thinking whether any of them needed our ‘Pudding’ doctor I had available for them downstairs ;) or whether anyone looked overdosed on sugar? Nut nah, everyone was still ready for more!…Next up was Pudding 4, this was my homemade pudding – Red Bean Sweet Dessert with Peanut Mochi. Mochis are asian rice cakes made of soft and extremely sticky glutinous rice paste. The mochi rice cakes I served were filled with a sweet peanut paste. I thought it would be interesting to add some culture to the Pud Club, instead of them all being British Pudding favourites – my most fave Chinese dessert is this one. Red Bean sweet desserts are very popular Chinese dishes and can be served hot or cold. It’s prepared by boiling (and mashing if preferred, but I didn’t) red beans until soft and then sweetening the paste with rock sugar or honey. I added peanut mochis to give the pudding extra added flavour. I hope Pudding attendees enjoyed this ‘unusual’ dessert but it’s nice to try something different! 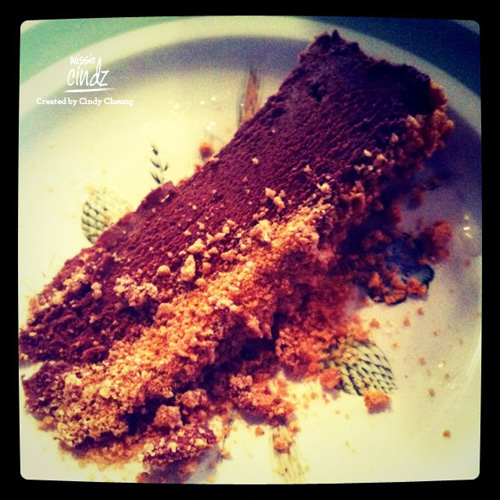 Rum truffle Torte made by Annie Parmee. Thanks Timmy for the photo :)

And finally but not least was Pudding 5: Rum Truffle Torte made by Annie Parmee. Beautifully presented. The torte was super rich but Annie reassured all attendees as she was serving up, how they’d only need small slithers of the torte to be satisfied and she wasn’t wrong! Simply a really lovely chocolate dessert. Comments for Annie’s pudding from the attendees score sheets included:
“Fantastic, but very rich so maybe better served with cream perhaps?”, ” sooooooo rich but delish! I really liked the crumb toppings” and “Like chocolate brie – amazing!!” and “Gorgeous!”.

A big thank you to Callum Biggins (Callum T Photography) for the amazing photos too – it was brilliant working with you. I knew I’d be busy hosting and in the Rutty kitchen serving out Puddings so wouldn’t be able to tweet or take Pud photos, so when Callum sensed my disappointment of having now no pud photos of my first club, he came to the rescue. Sweet! I haven’t posted up all the food photos on my Blog, there are plenty more pudding-licious photos from Callum to gawp at on my Facebook: Missie Cindz Food Adventures 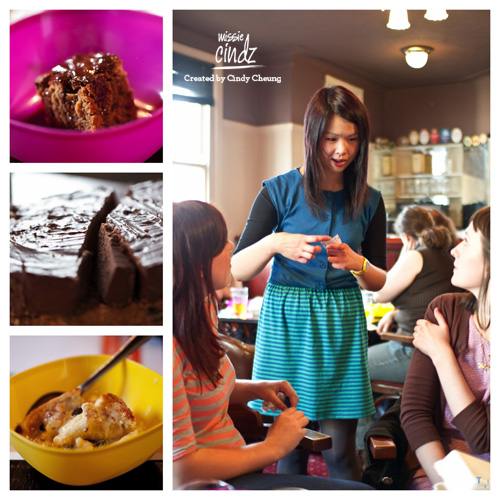 Take me to the Pudding Club...I'm busy talking about all things sweet to guests :)

So there you have it, our first (of many more) Pudding Clubs at the Rutland Arms. Mission Completed. One attendee said to me how they were expecting each portion sizes to be just sample sizes of each pudding and weren’t expecting such huge portions. Well, if you know me well, Missie/Cindy and the Rutlands don’t really do ‘small’ portions. It was fantastic meeting so many new people (and tweeters) yesterday, was lovely to put faces to those tweets and I was so pleased to find out that so many of you helped me to tweet using the hashtag #MissiesPuddingClub so that people could follow our conversation – you all took lots of delicious pudding photos and shared them too (we’re still reading through the timeline and getting full!) – Big thank yous – You’re all NOM!

Just like the old saying……”The proof of the pudding’s in the eating” – and I definitely made sure our 20 pudding guests ate til their hearts were content and filled with sugar. I’ll be planning our next Chrimbo Pudding Club next month, so please look out for event news and how to book your spoons on this Blog or in the Rutland Arms. I’m really looking forward to meeting you all again and hopefully those people who couldn’t make it to our first one will be available for the next one? remember, no skinny jeans allowed! (we’d hate you to feel uncomfortable) – Cindy/Missie :)