Take me to the Pudding Club 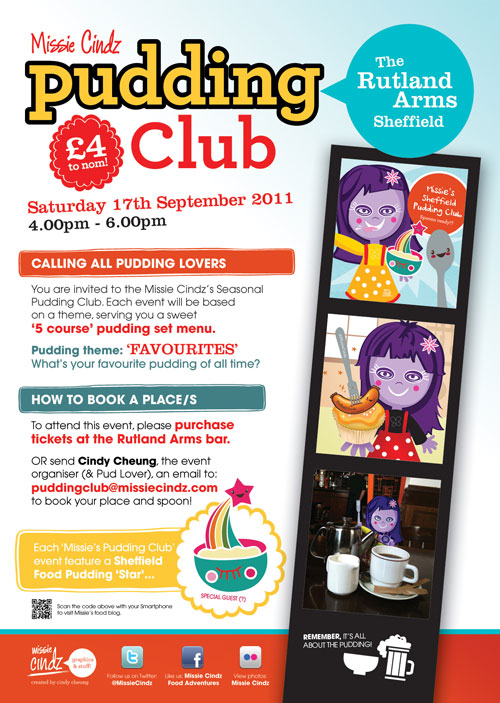 Calling all Pudding Lovers from Sheffield and Beyond
You are invited to the Missie Cindz ‘s seasonal pudding club on 17th September 2011, held in The Rutland Arms (upstairs) 4.00pm –  6.00pm, where you will be able to indulge in a sweet ‘5 course’ pudding set menu. Each event will be based on a theme, Autumn’s theme being based on ‘favourites’ – what’s your favourite pudding of all time? Let us know and you could find it served up to dig in!

To book a place and smiley spoon, tickets and bookings will be available from 22nd August.
Tickets priced £4.00 per person. Purchase tickets from the Rutland Arms bar, the event venue (Brown Street, Sheffield) or send Cindy Cheung, the event organiser (and Pud Lover), an email to: puddingclub@missiecindz.com to book your spoon. Please allow 24 hrs for email confirmation of your booking. Your place/places are not guaranteed until you receive this email. Places are limited so please book early.

I liked the idea of a Pudding Club because it’s socially fun and you can chat to people over mouthfuls of sweet goodness. Each ‘Missie Pudding Club’ event will also feature a Sheffield Food Pudding ‘Star’ (woooo hoooo, I hear you all whistle and clap!? :), this will be a pudding made by an artisan, independent food producer/business based in the Sheffield area.

Look out for more event details on this Blog and tweets by following the hashtag #MissiesPuddingClub. I’ll be in touch soon with more Pudding updates. In the meantime, download this brightly coloured Pudding Club Poster, print it off and let all your friends and family members know that it’s all about pudding! :)

Autumn’s pudding theme is ‘Favourites’ – We asked the followers of the Missie Cindz what their favourite puddings were and here were some of your comments. A big thanks for your participation, you’re all nom! :)