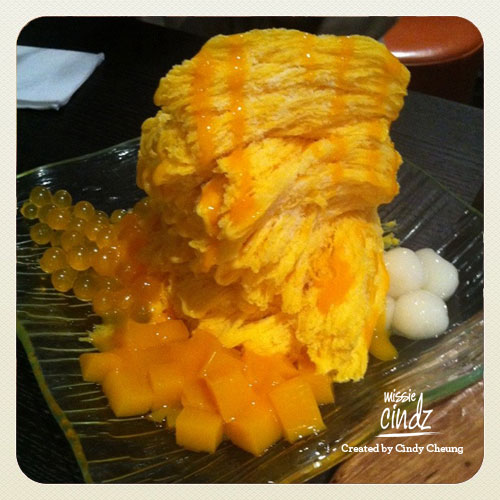 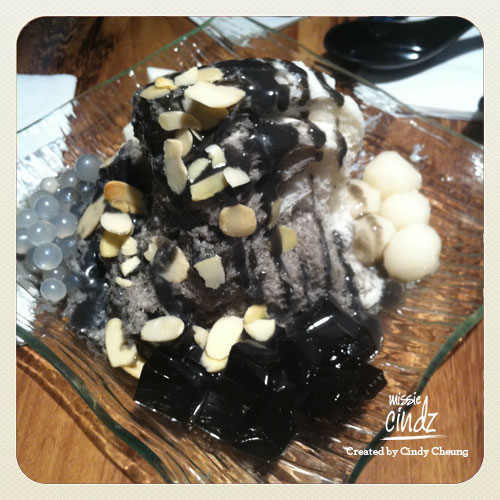 Let it snow in summer
This weekend I decided to take the fork to Manchester and like always, when we’re here, we make a stop into, Chinatown. We stopped in Wasabi, Faulkner ST on the same street as the large arch for sushi and dessert washed down with taro flavoured bubble tea. The intriguing looking dessert (found above) is called Snow Ice, and is a cold sweet dessert made by feeding frozen blocks of milk, or flavoured milk, into a machine that shaves it into thin sheets. They come in multiple flavors, from mango, durian to more funky combos of almond and black sesame. I’d never eaten this type of dessert before but lots of my friends had been raving on about them so I wanted to see what the hype was about…

We had the mango flavour and also a magic combo of black sesame with roasted almond flavour (just having the one would be wrong!). Our mango snow ice was topped massively high served with mango cubes, small balls of plain mochi, grass jelly cubes and mango puree. Overall, it tasted refreshing with the strong mango aroma, I was surprised to find that it was all made from the tissue-like flavored stuff rather than sitting on a bed of shaved ice but that worked just fine for me. Just watch out for the brain freeze and the chewiness of the mochi complimented it perfectly too. It really felt like eating fresh mango snow!

This giant thing came out priced £4.95 (each) – Bubble teas priced at £2.50. Milk is one of the ingredient that I guess that causes the price to be a little bit higher than your average dessert – it was absolutely fun to eat and very refreshing.

Snow Ice is extremely healthier and low in calories than say ice-cream or a piece of cake, mildly exotic too (like bubble tea), reasonably affordable, and It’s relatively still new which makes it highly fun and appealing to Food Adventurers like me. If anyone out there has tasted Snow Ice desserts before what flavour did you have and what were your thoughts?

Chinese desserts/puddings…
Some types of oriental/eastern desserts can be especially difficult to sell here because the ingredients in them are, let me think how I can put it nicely….uhmm, somewhat, can be weird looking and intriguing in taste & texture. Upon looking into a bowl of quivering black grass jelly, or slippery grey-purple taro cubes, or chewy marbles made out of a purple root or even reddish-brown mushy red beans. As a newbie to these Chinese delicacies, a first question is always, “What the frig is that!?” (as put by @hworsnop :) followed by, “And why are you eating it?…” From certain angles, one can imagine the contents were dug out of Pluto. But I assure you these ‘weird’ desserts/puddings are absolutely amazing!! – don’t ever judge a book (food) by it’s cover (name and look)…These eastern desserts might be a hard sell indeed, but I’m sold by anything sweet and amazing looking! :)