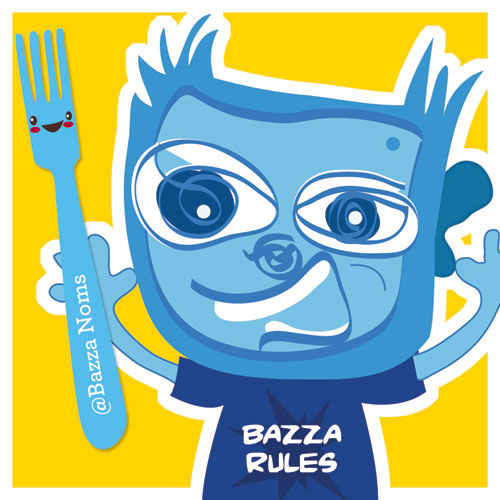 Cindy decided to create a new character called Bazza – who by looking at him, you’d think he was a massive fan of either blue food colouring or blue coloured Smarties perhaps? Missie Cindz now has a new friend call Bazza, cynical and sardonic to a terminal degree, Bazza’s intellectuality and academic insight is often counterbalanced by his pronounced lack of motivation. His trademark characteristic is his blueness, and that he rarely changes his facial expression or the tone of his voice, except for a small satisfied smile akin to the Mona Lisa’s when he is pleased and sometimes a high-pitched “ha!” sound when something is suggested or hinted that involves (his love for) fried chicken or chicken nuggets.

In his spare time, Bazza likes to design stores, write and play on the PS3 (Street Fighter fan), but he is generally reluctant to make his work public and is usually dragged around local London markets with Missie Cindz , or being her food companion. You’ll find Bazza (rarely) tweeting over at @BazzaNom (part of the Missie Cindz and Friends Series).

Keep your eyes out for all things blue and Bazza-rious soon!

(Illustration by Cindy Cheung. This post was last updated September 2013)