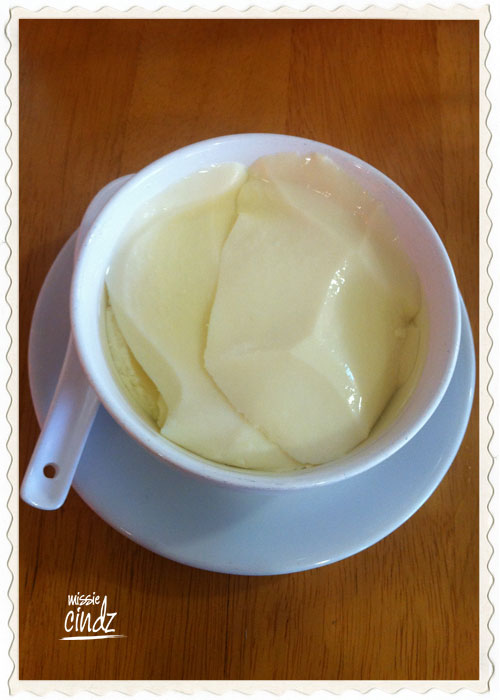 I’ll let you on a Missie Cindz secret: I’m a self-professed tofu lover, I have a deep attachment to all things made from soya beans, and this Chinese dessert is no exception. ‘Tau Fu Fa’ (pronounced in Chinese – see my photo above), also known as ‘soya bean dessert’ or tofu pudding is a silky-smooth Chinese dessert that will glide effortlessly down your throat. It’s a very versatile dessert that can be served hot or cold, sweet or savoury and different Asian countries serve it differently – I like it served in a big bowl drenched with brown sugar syrup :)

A Happy Bean
Tau fu fa does not only taste good, it’s also a sweet blessing for people watching their weights and a must-have for women craving good skin :) Soya beans ensures a healthy complexion, so what better way to enjoy them than with this dish? (NOM!). Soya bean desserts are available to buy in a range of Chinese supermarkets – Kung Heng (169 London Road, Sheffield) makes their own fresh Tau fu fa and you can find pre-made ones in Tai Sun supermarket on Matilda Street (Sheffield) and I much prefer the fresh homemade packs so if you can get up there, grab a pack to try! But please remember, you will need to make your own sweet syrup to add for taste – usually the puddings made here won’t have added flavours (and without it the pudding will be tasteless – put you off).

Instructions:
1. Mix all the ingredients and boil over the hob until sugar dissolves
2. Keep aside to cool

To serve, pour syrup over the tau fu fa and serve warm.

The process of making fresh tau fu fa is almost similar to that of making soya bean drink (I’ve never made it myself but I’ve been told it requires skill) and like most dishes made from soya beans, there are a few things you have to be careful with during the preparation of this dish. Firstly, I’ve been advised by Missie Mum (she’s head chef too), after preparing the soya milk and boiling them, you have to make sure you gently remove the bubbles at the surface of the milk before proceeding to cover it with a cheesecloth (or a muslin cloth?). This will ensure you obtain a smooth, even texture once it has set instead of ‘holey’ ones. Also, when you pour the soya milk into the pot to set (just as you was making jelly), it’s recommended to pouring the mixture at a height of about two feet. This seems to work best to give beautiful tau fu fa, not only in terms of appearance, but also when it comes to its taste, even if it’s just a subtle one. Once the tau fu fa has set, you should very gently and thinly scoop them out into bowls as they have a very delicate texture, and ladling them out roughly will only spoil the whole experience of devouring this silky-smooth dessert.

If any of you have managed to try ‘tau fu fa’ let me know your thoughts – how did you serve this? post your comments below or tweet me @missiecindz

It’s always great to food share…happily go out and seek those happy beans!