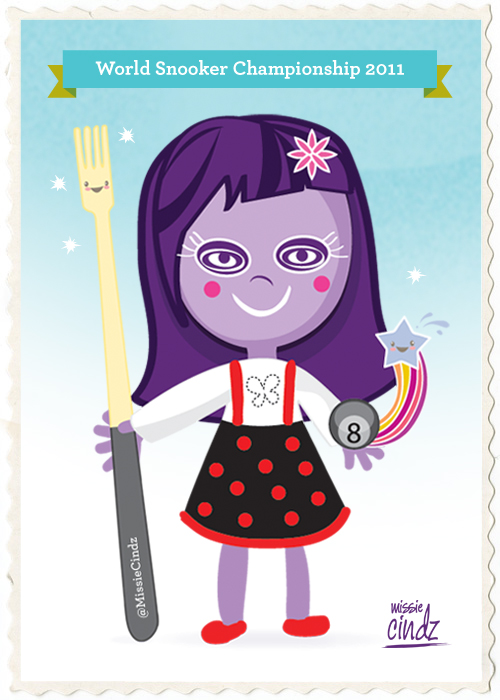 I’m looking forward to this year’s event – Potty lots of luck to all the players involved in the World Snooker Championship :) May the best man win.

The World Championship which starts today is one of the most eagerly anticipated for years (my mum goes MAD for this sport!), and there is a real sense of excitement in the city centre, I walked through Tudor Square yesterday where they were putting the finishing touches to the ‘interactive’ outdoor marquee and I can say it’s all looking really good! The big screen’s ready and there’s also a huge number fringe events put on for the public relating to the snooker too – one of them being ‘Street Snooker in Tudor Square’, a snooker-inspired kickwall game and it’s free for adults and children to have a go.

For those unfamiliar with Snooker and that stuff (yes, I used to be too), Sheffield has been the home of Snooker since 1977 and can you believe a few years ago, they were going to take this event away from us too? Over the years snooker stars such as Stephen Hendry, Ronnie O Sullivan and Jimmy White have competed – and won – in our Sheffield’s most famous theatre venue – the Crucible.

Pot Lots of Food!
It’s been said about tens of thousands of people who come to Sheffield over the 20 days stay in local hotels, buying meals in restaurants and buying a drink in local pubs (and if any of the players ever need Missie C’s recommendations on were to eat, all they have to do is to tweet! @missiecindz :)…I’m sure a mean burger served with ‘proper’ chips, splashed with our own Henderson Relish and served with a pint of local beer will put a huge smile on the players faces! – maybe a scoop of Sheffield’s @OurCowMolly for dessert too?

If Marco Fu fancies a Chinese, I know an oriental place he’d take a fancy to or if Ronnie craves for something fiery and sharp – then there’s a cool Indian that might prove to be too hot for him to handle. Well, all I can say is, whatever these players need or want in terms of food and drinks, I’m sure Sheffield will be well catered for them and if all fails, a piece of cake will do the trick shot right? – (and I know the perfect cake shops in town! :) Who knows, if any of the players are free next weekend (a day off from playing or training perhaps?), then I could take them up to Bradfield Farmers’ Market – the biggest food producers market in Sheffield, for some Sheffield – beef, pork, lamb, milk, cream, eggs, potatoes, honey, chutneys, preserves, bread, beer, tea, coffee, yoghurt, the Missie Cindz food list goes on! (I’m sure our friendly food producers will ensure the players are fed well too).

Good luck to all the players involved – let the best man win and many thanks to the event organisers, TV crew and technical staff (all those involved) who have helped to make this year’s event happen.

Event Details:
Date: April 16 – May 2 2011
Location: The Crucible Theatre, Sheffield
Click here for the draw and format of play