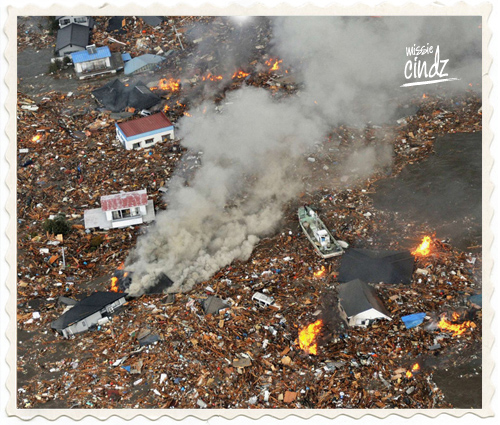 A massive earthquake measuring at least 8.8 on the scale of Richter hit North East Japan yesterday. Buildings as far away as Tokyo shook with force, causing many injuries, fires and a four-metre (13-ft) tsunami along parts of the country’s coastline which tossed boats and cars around as if they were children’s toys. There’s some very impressive pictures of the disaster found here http://pulsene.ws/14PMC by @totallycoolpix , it’s scary to see how vulnerable we are against natures forces and those pictures I’ve seen so far are heart breaking!

But let’s just pray for these people. Pray for brighter days to come.

Yesterday’s disaster really puts one’s life in focus and how it is so unpredictable…Live everyday like it is your last (if there’s enough of your colours to paint your surrounding in your fave shades – just do it!). Love your enemies (well, at least a smile :) and give out as much happiness as you can… Life is just too fragile – and Japan proved this to us yesterday!