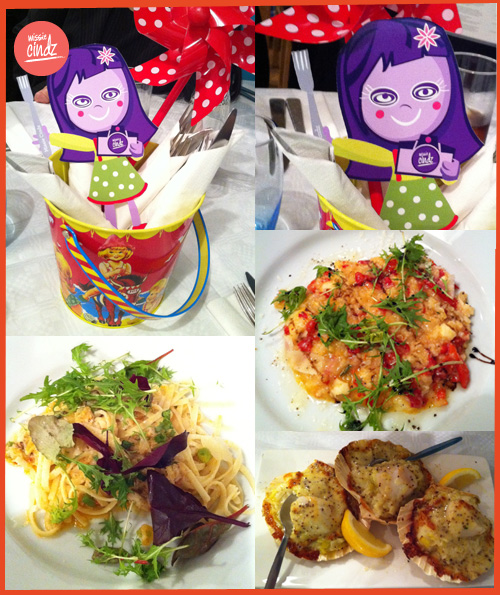 A Good Catch?
We visited Catch on a Wednesday evening, I had never been before and was struck by the effort that had gone into the theme and decor of the restaurant. The restaurant is quite bright, open plan and industrial looking. The tables have seaside buckets with windmills and spades as well as cutlery and those paper cloths in seaside fish and chip restaurants (I liked the novelty of this). Their walls were adorned with old style seaside holiday posters (all your classic UK seasides were featured), and there was also a fifties style jukebox, all which makes Catch look lovely and kitch. However, I didn’t like the fact that the menu was written up on boards on the wall which were awkward to read and often had to stand in front of the boards to read them, getting in the way of the waiters and also not looking very attractive gawping infront of eaters too. I’m sure others would find difficulty reading them too – let me know what you think?

Let’s get foody
For starters (4 of us) had scallops in a garlicky cheese sauce (£4 each), Sheffield Fishcakes with a celeriac puree, seafood chowder served with homemade bread (well, I hope it was homemade) and a nicely presented prawn cocktail.
Started off promising with yummy starters each but the mains were pretty disappointing. Standard main courses ranged in price from £10 to about £16 and a number of dishes were available as either a starter or a main course. For our mains we opted for Catch Classics which included; (a very well-done) fish served with great big chunky chips of the old fashioned variety (£13), mackerel in a olive tapenade (£12), crab (where was it?) linguine (£12) and goats cheese with red pepper risotto (vegetarian, £10). All which were OK tasting but felt slightly disappointed by the absent of watercress in my main (as stated on the menu board) and my friend’s absent of coriander in her linguine main– we would had appreciated the waiter informing us if they hadn’t had the ingredients available as it would had altered our choice of main. The portions were average (but for someone like me, who isn’t a massive portion eater, I found it fine) and we felt that all meals were lovely in presentation but slightly off mark on value for money and expectation.

I imagine the lunch menu is good value, with a Early Bird menu (5pm – 7pm) also available – 2 courses £14 or 3 courses £16. We had high hopes but came away disappointed :( shame really! as I will travel anywhere to eat good seafood! Even Crosspool.