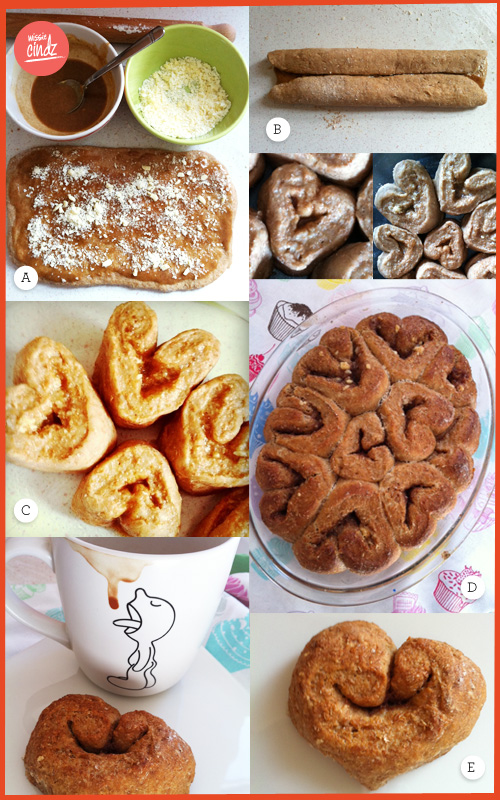 I am definitely a Bread Lover and this weekend I decided to set myself a ‘Foody Challenge’ which was to make my own bread rolls (I’d never made breads before).

This weekend I made Cinnamon Buns. As it’s Valentine’s Day next week (and as I have alot of love to give), I wanted to try to make these heart-shaped and also added grated white chocolate to the cinnamon filling (like always, I like to add a bit of ‘Missie-ness’ to a recipe ;). The aroma from the oven as they cook is amazing and they taste delicious. Here’s how I made these delicious hearty delights…

1. Place the flour, sugar and 1 tsp salt in a mixing bowl, then rub in the pieces of butter until the mix has the texture of breadcrumbs. Tip in the yeast and eggs. Pour in the milk and mix well until you get a soft dough (you may need to add a little more milk). Knead in a mixer with a dough hook for 7 mins or by hand for about 15 mins until the dough is smooth, soft and springy. Tip into a lightly oiled bowl, cover with oiled cling film or a clean tea towel, then leave to rise in a warm place for about 1 hr or until doubled in size.

The dough can be put into the fridge until the next morning, if required.

2. When the mixture has doubled in size. On a lightly floured surface, punch down the dough and knead to knock out the air, then split the dough in two. Roll and stretch each piece to form a 15 x 30cm rectangle about 1.5cm thick (trim the edges if you”™re having trouble getting the desired shape – see photograph, marked A).

[Directions from here on are for both breadmaker and handmade dough]

3. Make the filling: melt the butter and stir in the sugar and cinnamon. Spread half the cinnamon sugar/butter mixture evenly over the entire dough rectangle. Sprinkle generously half the grated white chocolate.

To form the heart shapes:

4. Now you need to carefully roll the long edges of the dough into the centre (see photograph, marked B).

When both edges are rolled into the centre, cut each log into six similar-sized pieces.
Taking one piece at a time, unroll both edges about 1 inch and pinch the loose part at the bottom to form a heart shape. Place into the baking tray/tin – note that the rolls will expand as they rise so spacing is important. Try to make sure they all have equal space so that all of the heart-shaped rolls will be a similar size (see photograph, marked C). Keep going until you have shaped all six pieces. Cover with a cling film and leave in a warm place to rise.

5. Heat oven to 180C/fan 160C/gas 4. When the rolls have risen so that they take up most (or all) of the space of the tin. Remove the cling film from the tray, then bake for 30 mins until the buns are lightly browned and feel firm. Serve with a nice cuppa tea!

The Icing is optional but makes this a naughty little hearty bun! :)

In a small bowl add a few drops of lemon juice to the icing sugar and mix to a fairly thick consistency (you want the icing to be a bit gooey but not so runny that it slides off). Remove the rolls from the oven and leave to cool slightly (5-10 minutes). Drizzle the icing over the top of the rolls and serve. Delicious!