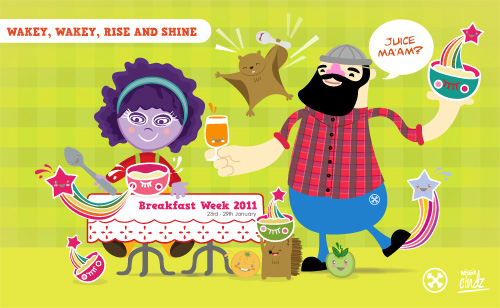 My Missie Purple mascot has finally made some new friends thanks to @irarmadilloboy! (aka Jason). Missie Purple (I haven’t really come up with a better name for her, unless any of you can think of anything more suitable?), has always been a-kinda loner girl. So, at the beginning of this year, I tweeted @irarmadilloboy if he’d like to work with me on an illustrative piece – I was praying he’d not turn me down! (no-one, especially a girl, likes to be rejected). So I was well pleased when Jason agreed! Our brief was simple; something playful and with a Breakfast theme (what’s more appropriate since it’s the start of Breakfast Week? :) …so here’s our little something we put together to promote Breakfast Week 2011!! (found above).

We all know how important breakfast is (we both do, without it neither of us can function properly!). Head on over to – www.shakeupyourwakeup.com/about – to learn more! 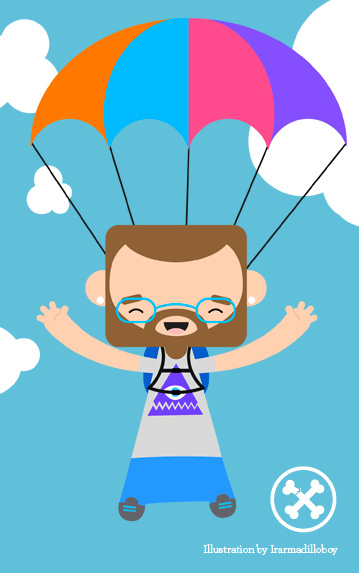 Jason’s no stranger to hard work and dedication either which is why I’d like to say a very big thank you to him for giving up some time for doing this fantastic ‘special’ illustration. I was drawn to Jason’s playful and colourful portfolio when I stumbled across his Twitter Avator (lol) – the bearded bloke (also, found above). I think, us being in the same design profession also helped us to understand each other and what we were after. He has a playful vector art style; with graphics and unique characters that ooze confidence and defined personalities.

Before doing this collaborative piece with Jason, I’d always worked alone on my personal projects (a first time for everything I guess), and by doing this collaborative piece with him, I’ve learned to be adaptable – not rigid; regular communication between us meant that we were on the same page, we quickly established an open environment in which we both could easily share with one another and we also allowed plenty of room for compromises to be made (in the name of progress, rather than clinging to an idea we might had disagreed/set on). Initially Jason had illustrated a robo-fish chef for me! then, looking at my proposed first visuals to him, he decided to revisit his illustration so that it would complement with what I’d proposed, and realised rather quickly, it needed a new main character…with little helpers/friends too! (we are certainly going to use the robo-chef in another illo though Jason!! ;)

Once again a big thank you to Jason for taking the time to be a part of this and if you’d like to find out more about him or any of his work then please visit his site using the link here: http://www.irarmadilloboy.co.uk